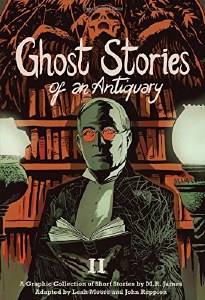 Curl up by the fire and enter the sinister, supernatural world of Montague Rhodes James, the master of the English ghost story. An influence on writers from H.P. Lovecraft to Stephen King, James's tales of understated horror continue to transfix readers 80 years after his death.

Ghost Stories of an Antiquary, Vol. 2 comprises graphic adaptations of four spine-chilling stories by M.R. James: Number 13, Count Magnus, Oh, Whistle, and I'll Come to You, My Lad and The Treasure of Abbot Thomas/. Filled with intrigue, suspense and intellectual adventure, these captivating tales of terror plunge the reader into a world of creeping dread, where rationality is challenged and the mundane collides with the supernatural.