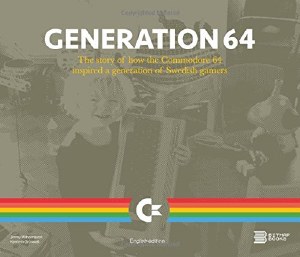 How the Commodore 64 Inspired a Generation of Swedish Gamers

The Commodore 64 proved to be a milestone release in the world of computing. Launched in 1982 it immediately captured the imagination of an entire generation of gamers, artists, musicians, crackers and programmers who would push its meagre hardware to create a range of amazing games, demos, art packages, CAD programs and music synthesisers.

Young people the world over learned their craft on the C64, but in Sweden the machine’s legacy is unparalleled: it sired a raft of incredible talent who have since gone on to create amazing products and services that have, without exaggeration, changed the world.

Generation 64 by Jimmy Wilhelmsson chronicles this talented group and traces their path from backroom coders to giants of the connected world. Karl Hornell was a games developer who created POwerRoom.com in 1999, and which was sold to Ongame for £450 million. Frederik Liljegren started a demo group and later became the founder of highly respected developer DICE, which is currently working on Star Wars: Battlefront. Kim Nordstrom started life as a graphic designer, helped developer the PlayStation 4 and is now Head of Studio at King, which enjoyed some success with a little game called candy Crush Saga. Former coder Oskar Stål is now Chief Technical Officer of the music streaming service, Spotify. And on it goes…

Bitmap Books is proud to present the English language version of Generation 64, which features in-depth interviews with dozens of Swedish entrepreneurs. Edited by legendary C64 games journalist Julian Rignall, this 184-page hardback book features over 50,000 words, complemented by a wealth of Commodore 64 imagery, some of which has never been seen before. With a foreword by the founder of DICE, Frederik Liljegren, and an introduction by the designer of the 6502 CPU, Chuck Peddle, Generation 64 is an unmissable account in the history of the C64 and the part it played in the creation of the modern world.