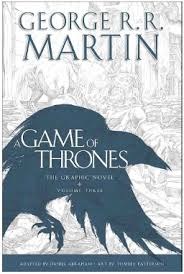 When dealing with a masterpiece, only the best will do. That’s why writer Daniel Abraham and illustrator Tommy Patterson were chosen to adapt George R. R. Martin’s beloved fantasy classic A Game of Thrones as a graphic novel. And as anyone who has read the previous two collected volumes of the ongoing series can attest, the result has been a stunning tour de force faithful in every respect to its brilliant original.

In King’s Landing, Lord Eddard Stark of Winterfell—the Hand of King Robert Baratheon—is surrounded by enemies. Some are openly declared, such as Ser Jaime Lannister and his sister, Queen Cersei. Others are hidden in the shadows. Still others wear the smiling mask of friends. But all are deadly, as Eddard is about to discover.