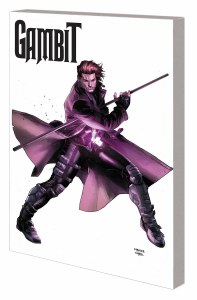 Gambit has sets his sights on his biggest scores yet but he may end up over his head! Raiding a lost temple of doom is all in a days work for Marvels premier thief...until an ancient god-monster is accidentally loosed on Earth. Then, Gambit travels to the United Kingdom to heist the greatest weapon in the history of man: Excalibur! Whether hes rescuing archaeologists from the Forever City, teaming up with Avengers marksman Hawkeye, chasing a mysterious lady thief or facing down a horde of super villains, the ragin Cajun is the one holding all the cards! But when Pete Wisdom calls in a favor, Gambit will need all his skills to save those dear to him! Who is Remys friend Fence, and what secrets is he hiding? Collecting GAMBIT (2012) #1-17 and material from A+X #3. Rated T+