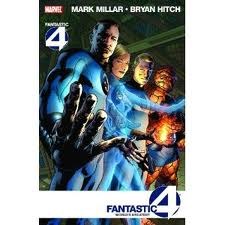 Written by MARK MILLAR Penciled by BRYAN HITCH Cover by BRYAN HITCH Marvel's First Family meets Millar and Hitch! When one of the world's greatest writers teams up with one of the world's greatest artists, the result is the truly World's Greatest Comic Magazine! Following their epic successes with ULTIMATES and ULTIMATES 2, Mark Millar and Bryan Hitch reunite to forge a new future for the Fantastic Four! Taking their cue from the wild-eyed, creative abandon of the classic Lee/Kirby years, Millar and Hitch make the book decisively their own! First up is the return of Reed Richards' old flame, Alyssa Moy, with news of worldwide calamity that only Mister Fantastic can help divert - but what if the price is his marriage to Sue? Next, the Defenders are back and barraging New York with high-velocity attacks. This mysterious group of heavies has taken out Doctor Doom and Johnny Storm - and that's not even their biggest surprise! Collecting FANTASTIC FOUR #554-561. 192 PGS./Rated T+ ... $19.99 PRODUCT UPDATE (110508): The Fantastic Four: World's Greatest TP will be 200 pages, not 192.