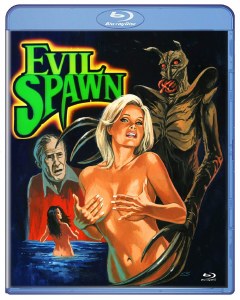 Produced during the heyday of Straight-To-Video mania, EVIL SPAWN (1987) takes on the Kitchen Sink approach fo story-telling. A faded, once desirable, top-tier actress, Lynn Roman (BOBBIE BRESEE), desperate for a comeback movie role, allows herself to become the subject of an experimental drug developed by a mad scientist, played by Horror Movie Icon, JOHN CARRADINE.

Amazingly enough, the formula works and Lynn Roman regains her youth... along with the unpleasant side effect of periodically turning into a large, bug-eyed monster!