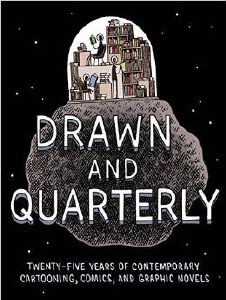 Drawn & Quarterly: Twenty-Five Years of Contemporary Cartooning, Comics, and Graphic Novels is an eight hundred-page thank-you letter to the cartoonists whose steadfast belief in a Canadian micro-publisher never wavered. In 1989, a prescient Chris Oliveros created D+Q with a simple mandate to publish the worlds best cartoonists. Thanks to his taste-making visual acumen and the support of over fifty cartoonists from the past two decades, D+Q has grown from an annual stapled anthology into one of the world's leading graphic novel publishers.

D+Q: 25 is the rare chance to witness a literary movement in progress; how a group of dedicated artists and their publisher changed the future of a century-old medium.