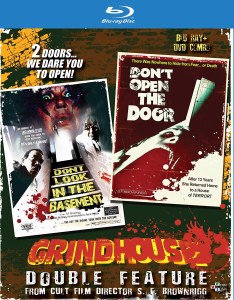 Don't Open the Door Don't Look in the Basement

VCI presents in a very special - Ultimate Package - from the low budget, cult-film director, S.F. Brownrigg's (Poor White Trash 2 and Keep My Grave Open) gory, gruesome, greatness - DON'T OPEN THE DOOR and DON'T LOOK IN THE BASEMENT. 2 Doors... we dare you to open! Both restored from new 2K scans, so bloody good we warn you... To avoid fainting, keep repeating: It's only a movie...It's only a Movie! Don't Open the Door - In this effective, low-budget cult-classic, a dutiful granddaughter goes home to take care of her dying grandmother. Once there, she finds herself trapped inside the house with a homicidal maniac and all hell breaks loose. Don't Open the Basement - this gory little chiller takes place in an experimental hospital for the criminally insane where the creative thinking director allows several inmates to act out their psychotic delusions (you know, like - necrophilia, paranoia, and popsicles). Things really start to get nuts when a new staffer arrives...starting with the bloody ax murder of the doctor himself and leading to a total takeover of this hallowed institution by its craziest and violent inhabitants. Bonus features include: Original Theatrical Trailers on Both Features, 2018 Commentary Track On Dont Look In The Basement from Film Historian and Journalist, David Del Valle & Genre Director, David Decoteau (Puppet Master III: Toulons Revenge) , Assorted other Grindhouse Trailers