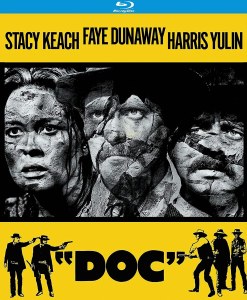 When two-fisted gunslinger Doc Holliday (Stacy Keach, The Long Riders) rides into Tombstone, he’s ready and willing to help District Marshal Wyatt Earp (Harris Yulin, Narrow Margin) clean up the unruly town, just as they did in Dodge. But to Doc’s surprise, Earp has changed from a steely-eyed believer in law-and-order to a greedy opportunist who’ll do anything to be elected Tombstone’s sheriff. To ensure his victory, the unscrupulous Earp enlists Doc’s help in double-crossing the most vicious band of outlaws in the territory, the notorious Clanton Gang. It’s a dangerous scheme that leads to the infamous showdown at the O.K. Corral, where a bloody slaughter transforms villains into heroes... and heroes into American legends. Written by legendary columnist Pete Hamill (Badge 373), directed by the great Frank Perry (The Swimmer) and co-starring screen legend Faye Dunaway (The Thomas Crown Affair) as Katie Elder.