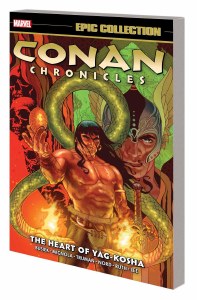 The Tower of the Elephant and other stories! Conan the Barbarian stars in more legendary tales filled with swords, sorcery, giant spiders and monstrous creatures including stories adapted from the original works of Robert E. Howard! Stealing the priceless gem the Heart of the Elephant from an unguarded tower seems like childs play but nothings ever easy for Conan! Then, a dalliance with a magistrates wife spells trouble, and Conans adventures in the City of Thieves continue as he runs a gauntlet of threats both human and inhuman! But what grotesque horrors await him in the Hall of the Dead? And is anybody ready for Conan...the King? Plus: Tales of Conans youth as he braves the Battle of Britas Vale and rides a wild Cimmerian bull! Collecting CONAN (2004) #20-39. Parental Advisory