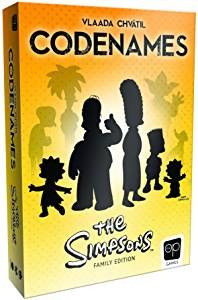 America's favorite animated family is ready for game night with Codenames: The Simpsons! The longest running animated comedy is celebrating 30 years of hilarious and dysfunctional antics comes to one of the best tabletop party games! The fun, easy to learn cooperative word and picture deduction game for 2-8+ players will be featuring your favorite characters from The Simpsons. Including Homer, Marge, Bart, Lisa, Maggie, Mr. Burns, Ned Flanders, Principal Skinner, Krusty the Clown, Moe, Milhouse, Ralph Wiggum, Chief Wiggum, Comic Book Guy, and many more! Players help their teammates locate secret Agents who are concealed among a grid of The Simpsons series references using only one-word clues.