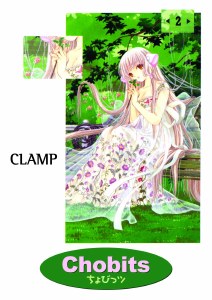 In a world where people rely on computers to escape loneliness, the logical conclusion is the persocom-attractive robot companions that are becoming everyone's boyfriend and girlfriend. Chi is a persocom, but she is also one of the legendary "Chobits," experimental persocoms built to acquire full awareness and emotion.

As Hideki and his friends search for the abducted Chi, others are watching them-others who know who built Chi, and why . . . and what went terribly wrong. It is already known that the affectionate persocom can in fact be quite dangerous . . . but the real danger is what the soul of this new machine means for the future of the human heart. Because it was never the computers who were weak, it was the people who made them . . . and if Hideki wants to truly save Chi, he needs the courage to truly love her! The conclusion of the best-selling Chobits saga!

o "Chobits is perhaps CLAMP's most mature work to date, and not just 'mature' in the fan service sense. This time, they take love into the twenty-first century, exploring humans' relationship with technology . . . The series is not only one of the sexiest manga in its genre, it is also one of the most endearing."-Manga: The Complete Guide