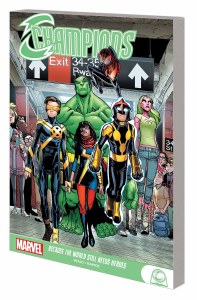 Because the world still needs heroes, they are...the Champions! In the wake of the second superhuman Civil War, the three youngest Avengers Ms. Marvel, Nova and Spider-Man quit the team and strike out on their own! With Viv Vision and the Totally Awesome Hulk by their side, these young heroes are determined to change the world their own way and theyre only the beginning! Their ideas quickly become their ideals, and soon the time-traveling young Cyclops joins their movement but not all of his new teammates are glad to see him! Hopefully the Champions can sort out their differences in time to face down their new rivals, the Freelancers, and help overthrow Hydras Secret Empire! Collecting CHAMPIONS (2016) #1-12. Rated T+