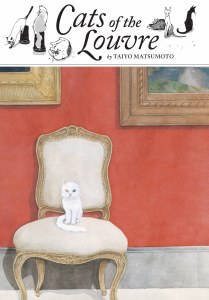 Cats of the Louvre HC

A surreal tale of the secret world of the cats of the Louvre, told by Eisner Award winner Taiyo Matsumoto.

The world-renowned Louvre museum in Paris contains more than just the most famous works of art in history. At night, within its darkened galleries, an unseen and surreal world comes alive--a world witnessed only by the small family of cats that lives in the attic. Until now...
Translated by Tekkonkinkreet film director Michael Arias.

One of the most influential and innovative manga artists currently working in Japan, Taiyo Matsumoto is best known to English-reading audiences as the creator of GoGo Monster, Number Five, and Tekkonkinkreet, which was made into a critically acclaimed animated film of the same name. In 2007, Matsumoto was awarded a Japan Media Arts Festival Award for Excellence, and in 2008, he won the prestigious Eisner Award for the English publication of Tekkonkinkreet.