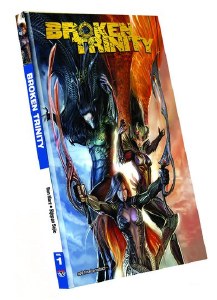 Collecting all six issues of 2008's blockbuster storyline, Broken Trinity, plus a cover gallery. In the tradition of such universe shaking stories as First Born, Broken Trinity upsets the status quo of the Top Cow Universe as one of the three principal characters in the never-ending battle between Light and Dark-Witchblade, The Darkness and The Angelus-dies, never to return. In addition, new characters enter the fray, setting the stage for a new ongoing series to debut later in 2009!