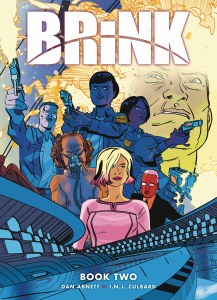 Humanity is on the brink in the second critically-acclaimed volume of smash comics duo Dan Abnett and INJ Culbard's atmospheric space-noir. Her past as an Investigator seemingly behind her, Bridget Kurtis is sent to the under-construction Galina Habitat as a security consultant. With a skeleton crew of engineers, architects and security personnel, construction is running behind schedule and Mariam Junot herself (the acting-CEO of Junot Corp) has arrived to find out why. Amid rumours of haunting and disappearances, Kurtis uncovers a sect conspiracy that may be more insidious and far-reaching than she ever imagined. Either the claustrophobic life in the space Habitats is driving humanity insane, or there are influences at play beyond any human understanding!