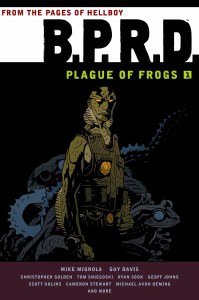 The successful B.P.R.D.: Plague of Frogs hardcover-the first of four epic volumes collecting the entire Plague of Frogs saga-returns as an affordable paperback! With over 400 pages for $24.99, there's never been a better time to delve into the haunting world of the Bureau for Paranormal Research and Defense. Hellboy creator Mike Mignola teams with cowriters Christopher Golden (Baltimore), Geoff Johns (Blackest Night), and others, for occult adventure drawn by Ryan Sook (X-Factor), Cameron Stewart (Batman and Robin), Scott Kolins (The Flash), and longtime, award-winning B.P.R.D. artist Guy Davis!