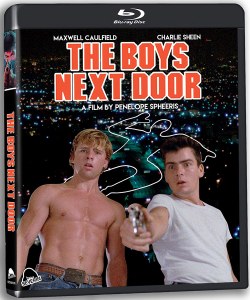 This is the moment '80s teen movies turned "harrowing" (Unobtanium13.com), "frightening" (FilmFracture.com) and "all too real" (CoolAssCinema.com). Now this "dark, forbidding vision" (Los Angeles Times) from Penelope Spheeris - director of THE DECLINE OF WESTERN CIVILIZATION Trilogy as well as WAYNE'S WORLD - and screenwriters Glen Morgan & James Wong - creators of FINAL DESTINATION and writers/producers of THE X-FILES - comes to Blu-ray for the first time ever.

Maxwell Caulfield and Chariie Sheen star as high-school outcasts who head to Los Angeles for a spree of petty crime, senseless violence and savage murder, "that will stick in your head for a long time" (The-Unknown-Movies.com). Patti D'Arbanville (BILITIS) and Christopher McDonald (REQUIEM FOR A DREAM) co-star in this "Descent into Hell" (BirthMoviesDeath.com) featuring music by Iggy Pop, Tex & The Horseheads and The Cramps, scanned in 4k from the original negative.