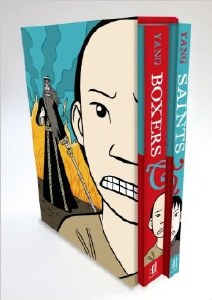 One of the greatest comics storytellers alive brings all his formidable talents to bear in this astonishing new work.

In two volumes, Boxers & Saints tells two parallel stories. The first is of Little Bao, a Chinese peasant boy whose village is abused and plundered by Westerners claiming the role of missionaries. Little Bao, inspired by visions of the Chinese gods, joins a violent uprising against the Western interlopers. Against all odds, their grass-roots rebellion is successful.

But in the second volume, Yang lays out the opposite side of the conflict. A girl whose village has no place for her is taken in by Christian missionaries and finds, for the first time, a home with them. As the Boxer Rebellion gains momentum, Vibiana must decide whether to abandon her Christian friends or to commit herself fully to Christianity.

Boxers & Saints is one of the most ambitious graphic novels First Second has ever published. It offers a penetrating insight into not only one of the most controversial episodes of modern Chinese history, but into the very core of our human nature. Gene Luen Yang is rightly called a master of the comics form, and this book will cement that reputation.