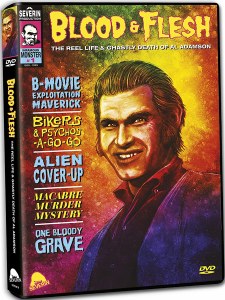 "Horror Film Director Found Slain, Buried Under Floor", screamed the 1995 headlines read around the world. But the truth behind the wild life of Al Adamson - including the production of such low budget classics as SATAN'S SADISTS, DRACULA VS. FRANKENSTEIN and THE NAUGHTY STEWARDESSES - and his grisly death reveals perhaps the most bizarre career in Hollywood history. Told through over 40 first-person recollections from friends, family, colleagues and historians - plus rare clips and archival interviews with Adamson himself - BLOOD & FLESH is the award-winning chronicle of bikers, go-go dancers, porn stars, aging actors, freak-out girls, Charles Manson, Colonel Sanders, alien conspiracies and homicidal contractors that House Of Mortal Cinema calls "Brilliant stuff… a superb documentary and one of the top films of the year."