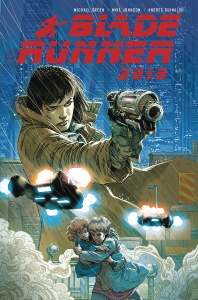 Winner of the 2020 SCRIBE AWARD for best Graphic Novel, this critically acclaimed graphic novel, is the official sequel to the cult classic 1982 science fiction film directed by Ridley Scott. Co-written by Michael Green, the Academy Award nominated screenwriter of Logan, Blade Runner 2049, and Murder on the Orient Express.

There's a new Blade Runner in town, and she's out for blood. Replicant blood.
When a rich industrialist's wife and young daughter go missing, seemingly the victims of a Replicant kidnapping, Blade Runner Ash is called in to rescue them before they end up on a slab or worse. As Ash's investigation deepens she uncovers a shocking secret that could very well end up costing her her life.

"Captures the tone of the source material while thrillingly expanding the scope of the larger world only hinted at in the films, resulting in the rare licensed title that feels essential instead of perfunctory" - Library Journal