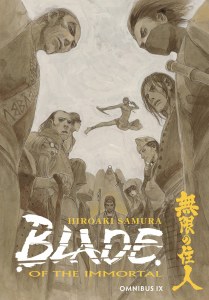 Anotsu's strange Itt?-Ry? crew is splintered and fatigued, and Habaki Kagimura's group of suicidal Rokki-dan soldiers is closing in on them! In this penultimate omnibus volume, Hiroaki Samura's spellbinding masterpiece sees several major storylines finally beginning to dovetail. As some characters' strange paths converge, Samura's epic study on revenge and survival begins to wind its way toward a massive final confrontation!