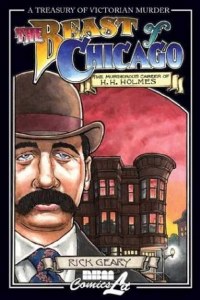 He was the world’s first serial killer and he existed in the late 19th century, operating around the Chicago World’s Fair, building a literal house of horrors, replete with chutes for dead bodies, gas chambers, surgical rooms. He methodically murdered up to 200 people, mostly young women. The infamous H.H. Holmes is the next subject of Geary’s award-winning and increasingly popular series.