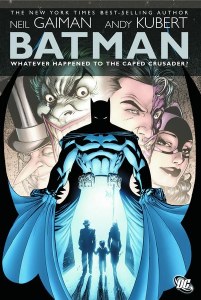 Batman Whatever Happened To the Caped Crusader TP

New York Times best-selling author Neil Gaiman (THE SANDMAN) joins a murderer's row of superstar artists in lending his unique touch to the Batman mythos! Spotlighting the story 'Whatever Happened to the Caped Crusader?,' from BATMAN #686 and DETECTIVE COMICS #853, in which Gaiman joins artist Andy Kubert and inker Scott Williams for a story that shines a new light on the Batman mythos, this title also collects stories from SECRET ORIGINS #36, SECRET ORIGINS SPECIAL #1 and BATMAN BLACK AND WHITE #2.