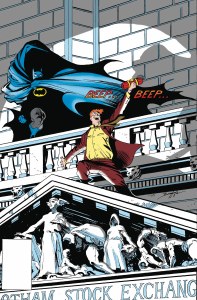 Batman must confront the evil that he is responsible for creating and personal demons that have haunted him since that fateful night in Crime Alley. Plus, the Dark Knight Detective usually works alone, but the threat of mass murder in the financial district forces him to team up with a bizarre private eye. Then, movies of death are being filmed in Gothamand Batman may be the next star. This and more iconic stories from the late 1980s! Collecting Detective Comics #592-600.