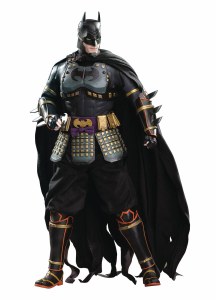 Based on the last year's Batman Ninja animated movie, Batman, along with numerous allies and enemies, get sent back to feudal Japan thanks to Gorilla Grodd's time displacement equipment. Batman must rely on Catwoman and the extended Bat-family to put a stop to The Joker and find a way back to modern day Gotham City! The Batman Ninja Figure is available in two versions; a standard Ninja Version and a deluxe War Version. The Ninja Version inlcudes multiple interchangeable hands, two batarangs, two kunai (throwing knives), a sword with sheath, and a figure stand.