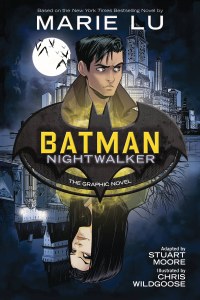 This action-packed graphic novel based on the New York Times bestselling novel by Marie Lu transports readers to the shadowy gates of Arkham Asylum, where Gotham City's darkest mysteries reside...and which now threatens to imprison young Bruce Wayne. A ruthless new gang of criminals known only as Nightwalkers is terrorizing Gotham, and the city's elite are being taken out one by one. On the way home from his 18th birthday party, newly minted billionaire Bruce Wayne makes an impulsive choice that puts him in their crosshairs and lands him in Arkham Asylum, the once-infamous mental hospital. There, he meets Madeleine Wallace, a brilliant killer...and Bruce's only hope. Madeleine is the mystery Bruce must unravel, but is he convincing her to divulge her secrets, or is he feeding her the information she needs to bring Gotham City to its knees? Adapted by Stuart Moore and illustrated by Chris Wildgoose, this graphic novel presents a thrilling new take on Batman before he donned the cape and cowl.