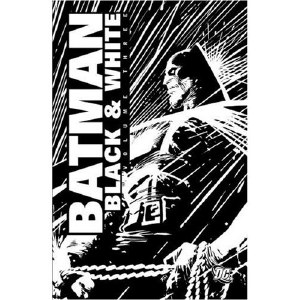 This series violates two long-standing superhero-comics conventions. It's in black and white, which has always been anathema to mainstream comics, and the eight-page succinctness of the stories in it has been out of favor ever since comic books ballooned into graphic novels, whose story lines sprawl through vast runs of single issues. This volume contains 33 pieces by some of mainstream comics' hottest writers (Brian Azzarello, Ed Brubaker, Mike Carey, Geoff Johns) and artists (Brent Anderson, Chris Bachalo, Darwyn Cooke, Sean Phillips), as well as by other creators seldom associated with costumed crime fighters. Alt-comics figure Scott Morse (The Barefoot Serpent, 2003) illustrates a ghost story spotlighting Bruce Wayne's butler Alfred, and Archie Comics mainstay Dan DeCarlo's Batgirl more than passingly resembles Betty and Veronica. As in any such anthology, the quality of the contributions varies, but the best of them, which use the black-and-white format to create a noirish ambience or a heightened sense of drama, or simply to show off the artwork to full advantage, prove that there's much to be said for conciseness and monochrome.