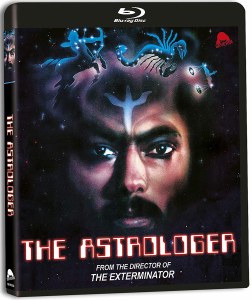 Before he became NYC's favorite '80s action auteur with hits like THE EXTERMINATOR, THE PROTECTOR and SHAKEDOWN, as well as executive producer of grindhouse classics that included MANIAC COP, FRANKENHOOKER and BASKET CASE 2 & 3, writer/director James Glickenhaus made his feature debut with this bizarre tale of government skullduggery, satanic killings, zodiacal mayhem and messianic horror. Playboy centerfold Monica Tidwell (NOCTURNA) stars in the "ultra-obscure and undeniably fascinating" (Fright.com) thriller. Also known as SUICIDE CULT and a one-time U.K. Section 3 'Video Nasty', THE ASTROLOGER is based on the acclaimed novel by John Cameron. Now featuring a 4k scan from the director's personal answer print and loaded with all-new Special Features.