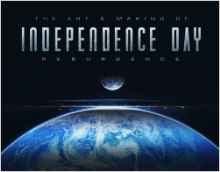 It’s been 20 years since the first invasion. The international community has recovered and rebuilt its defences using salvaged alien technology. However, before the last ship was destroyed in 1996, the aliens sent a distress signal. Now, that signal has been answered and humanity is under a threat greater than any it has faced before.

The Art & Making of Independence Day Resurgence takes readers from the aftermath of the ’96 invasion, through the rebuilding of the planet, and the new, terrifying threat about to hit Earth. From sketch to screen, the book delves into the design and creation of the colossal spaceships, aliens, vehicles and fighter planes, weaponry, and the new characters defending the world.