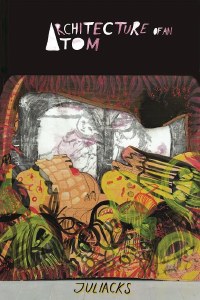 Architecture of an Atom HC

Juliacks is a comic artist whose work crude, ornate, subjective and dreamy is not for those who prefer their narrative crisp and tidy. The New York Times

[Juliacks's] cartoony and sometimes abstracted character design, her use of decorative drawings to reinforce other images and ideas on the page, and the way she modulates emotion by varying panel and letter size lends her comics a tremendous amount of impact. She's part of a group of artists that move with relative ease between the world of comics and fine-art, helping to redefine how we think about both. - The Comics Journal

With Architecture of an Atom, internationally recognized multi-disciplinary artist Juliacks brings her trans-media project to the print realm. Characterized by critics as a member of the immersive school of cartooning, she has sought to trouble the boundaries between fine art and comics throughout her career. A socially conscious, layered work in every sense of the word.

Juliacks is an artist, filmmaker, performer-choreographer, cartoonist, and playwright who splits her time between New Jersey, where she recently received a 2016 Fellowship from the New Jersey State Council on the Arts, and the Netherlands. She's been published and performed in various cities across North America and throughout Europe, her most recent project being the trans-media story Architecture of an Atom.