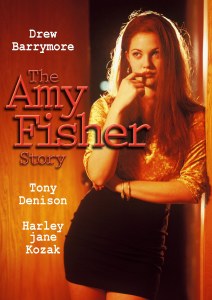 Drew Barrymore (Mad Love, 50 First Dates) sizzles in this unbelievable true story! On May 19th 1992, 17-year-old high school student Amy Fisher (Barrymore) fired a bullet into the head of Mary Jo Buttafuoco (Laurie Paton, TV’s The Commish), the wife of the bodyshop owner with whom she claimed to have been having a sexual affair. But in the explosive media frenzy that followed, did the truth become the most innocent victim of all? This is the sensational true story of lust, greed and obsession that shocked the nation. Barrymore stars as the notorious “Long Island Lolita,” the scheming teen from an unhappy home whose torrid relationship with Joey Buttafuoco (Anthony Denison, TV’s The Closer) led to a shocking suburban nightmare of prostitution, murderous assault and attempted suicide. This is the international theatrical version of the top-rated broadcast event, now containing uncensored scenes of graphic sexuality that couldn’t be shown on TV. Directed by Andy Tennant (Hitch, Sweet Home Alabama) and co-starring Harley Jane Kozak (The Favor).