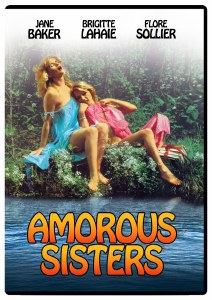 
The film (also known as JULCHEN AND JETTCHEN and COME PLAY WITH ME 3) tells the tale of the titular sisters, who attend an elite finishing school run by the comely Miss Brown (Barbara Moose). Though presumably more classes are on the curriculum, Jenny and Juliet are specifically interested in Miss Brown's in-depth sex education lessons and enjoy putting their suacy teacher's carnal knowledge to the test. And they do, in an endless series of intense, explicit sequences featuring tons of female (and male) nudity, wanton lesbian encounters and eye-opening solo acts. But unlike some of Dietrich's standard bump 'n' grind fare, THE AMOROUS SISTERS is much more cinematic experience, featuring some rather beautiful cinematography, handsome natural locations, delirious surrealistic passages and a gorgeous score by Dietrich regular Walter Baumgartner (JACK THE RIPPER, ROLLS ROYCE BABY).


Full Moon is pleased to present this classic voyeuristic romp in a gloriously restored, totally uncut high definition transfer culled from Dietrich's own digitally remastered negative. If you like tons of sex set against sumptuous scenery, THE AMOROUS SISTERS is the skin flick for you!