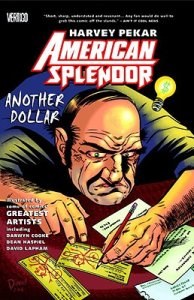 The retirement career as a comics and jazz commentator that Pekar posited in Another Day (2006) has proven elusive or, rather, as he allows herein, not lucrative enough to keep him from agreeing to script such nonfiction graphic novels as Macedonia (2007), Students for a Democratic Society (2008), and The Beats (forthcoming). Thank goodness, longtime fans must sigh, that he still does the comic book American Splendor, which made his name and launched that independent comics staple, autobiographical comics. In this roundup of the latest four AS issues, Pekar tackles issues facing any aging man—aches, pains, creakiness, forgetfulness—but also, despite his fabled (not least by himself) curmudgeonliness, some of the joys. In “Coventry,” he gets to recall his neighborhood of the 1970s. In “Bop Philosophy,” he gets to talk about jazz with a saxophonist friend. In “Global Warming,” he gets to play Jeremiah. Things get no better than stuff like that. Meanwhile, his artist collaborators these days (here, Darick Robertson, Hilary Barta, Rick Geary, Ty Templeton, among many others) give him their best every time