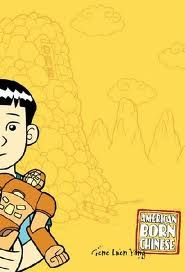 Indie graphic novelist Gene Yang's intelligent and emotionally challenging American Born Chinese is made up of three individual plotlines: the determined efforts of the Chinese folk hero Monkey King to shed his humble roots and be revered as a god; the struggles faced by Jin Wang, a lonely Asian American middle school student who would do anything to fit in with his white classmates; and the sitcom plight of Danny, an All-American teen so shamed by his Chinese cousin Chin-Kee (a purposefully painful ethnic stereotype) that he is forced to change schools. Each story works well on its own, but Yang engineers a clever convergence of these parallel tales into a powerful climax that destroys the hateful stereotype of Chin-Kee, while leaving both Jin Wang and the Monkey King satisfied and happy to be who they are.

Yang skillfully weaves these affecting, often humorous stories together to create a masterful commentary about race, identity, and self-acceptance that has earned him a spot as a finalist for the National Book Award for Young People. The artwork, rendered in a chromatically cool palette, is crisp and clear, with clean white space around center panels that sharply focuses the reader's attention in on Yang's achingly familiar characters. There isn't an adolescent alive who won't be able to relate to Jin's wish to be someone other than who he is, and his gradual realization that there is no better feeling than being comfortable in your own skin.