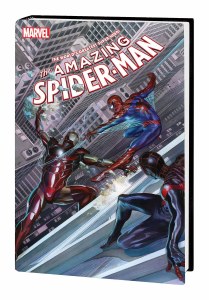 Going global means a whole world of problems for the wall-crawler! Regent, one of the most dangerous threats from SECRET WARS' Battleworld, makes his power play in the Marvel Universe! And it'll take Spider-Man, Iron Man, Miles Morales and the rest of the Avengers to have any hope of stopping him! But could it be that the key to foiling Regent's plans is a certain redheaded mutual acquaintance of Peter Parker and Tony Stark? Then, after an accident at Parker Industries, how far will Peter go to save his employees - both as CEO and as Spidey? And as a conspiracy begins to unfold, which classic characters will find themselves Dead No More? Collecting AMAZING SPIDER-MAN (2015) #12-19, and material from FREE COMIC BOOK DAY 2016 (CAPTAIN AMERICA) #1 and AMAZING SPIDER-MAN (2015) #1.