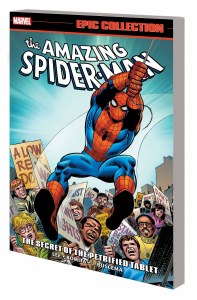 Two of the fiercest crime lords in New York City are on a quest to decipher an ancient petrified tablet whose secrets promise great power! Its an indisputable classic by two of Marvels greatest creators, Stan Lee and John Romita Sr. and thats not all they have in store! J. Jonah Jameson has the Daily Bugle working overtime to brand Spider-Man as public enemy number one, the Prowler hits the scene, the Black Widow debuts her sultry new spy gear and the origin of Peters parents is revealed! Plus: The Kingpin comes back for more, and this time its a family affair! Also featuring Gwen Stacy and the gang...whose heads are really going to turn when an ill Peter Parker strolls into a party in his Spider-Man costume! Collecting AMAZING SPIDER-MAN (1963) #68-85 and ANNUAL #5-6. Rated T