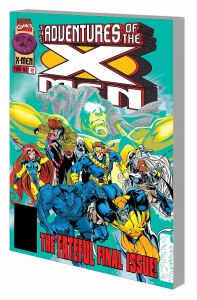 The most iconic X-Men of all, in more animated-style adventures! Jubilee faces a rite of passage courtesy of the savage Sabretooth! Then, Gambit finds himself in the middle of a war between the Thieves Guild and the Assassins but what will become of the ragin Cajuns brother? Cyclops, Jean Grey and Storm join the action as the X-Men are vexed by the Vanisher as well as by Sentinels, Spiral and the Hellfire Club! But will our merry mutants become media darlings in the maddening Mojoverse? Then, things take a turn toward darkness and despair as the team steps into the shadow of...the Man-Thing! With the Shiar Empire, the Watcher, the Living Tribunal and more universal forces drawn into the fray, brace yourself for a big finish on a cosmic scale! Collecting ADVENTURES OF THE X-MEN #7-12. All Ages