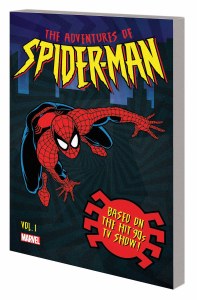 Action-packed adventures of the amazing arachnid, told in awesome animated style! Tune in as Spider-Man takes on some of his most fearsome foes with a few surprises along the way! Aerial combat is in store as Spidey faces the Vultures rage but can he stand in the way of the rampaging Rhinos revenge? Then, the wall-crawler finds himself squarely in the Punishers sights! And when Hammerhead strikes, he strikes hard! But when Spider-Man ends up on the wrong end of clobberin time in an encounter with the Fantastic Four, whos the one pulling the strings? Plus: Web-Head joins the X-Mens Beast and Gambit in battle with Mister Sinister to save the life of a young mutant! Collecting ADVENTURES OF SPIDER-MAN #1-6 and ADVENTURES OF THE X-MEN #3. All Ages