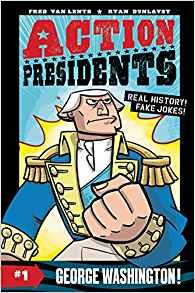 Where the history is real and the jokes are fake! "A delightful, educational spin on history—and plenty of jokes," said School Library Journal. "Sheer joy," praised Booklist in a starred review.

The first Action Presidents book will turn even the most reluctant reader into a history buff. George Washington, ultimate founding father and awesome American, practically jumps off the page.

We all know that George Washington was our first president and a hero of the American Revolution, but did you also know that he didn’t want to be president and had teeth so bad that he hated to smile?