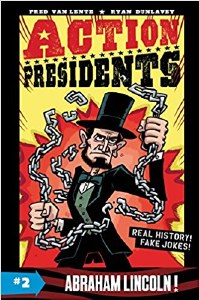 Where the history is real and the jokes are fake!

Did you know that Lincoln never went to college, and that he kept important documents in his famous top hat? Even the most reluctant reader won’t be able to put this graphic novel down, and they’ll learn about an American icon along the way.

The critics agree that the Action Presidents should not be missed. "A delightful, educational spin on history—and plenty of jokes," said School Library Journal of the first book in the series, George Washington. "Sheer joy," praised Booklist in a starred review.