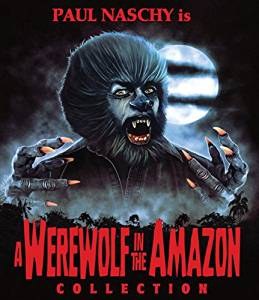 A Werewolf in the Amazon Collection DVD

International cult film icon Paul Naschy stars in A Werewolf in the Amazon, the heart of this four-film, 3-disc collection of vampires, werewolves, super villains and mummies as viewed through the dark and deliriously decadent lens of Brazil’s leading genre director, Ivan Cardoso. Long-sought after by film scholars and cult-movie aficionados, this first-time-to-DVD collection is brought to North American audiences by Camp Motion Pictures.

A Werewolf in the Amazon (2005) – In search of a powerful hallucinogen, five friends embark on a dangerous journey deep into the Amazon. But a bad trip isn’t the only threat, as they discover when they stumble across the hidden camp of the crazed Dr. Moreau and his murderous animal-human hybrid creations!

The Seven Vampires (1986) – As a botanist researches a dangerous carnivorous plant, a bumbling detective and his assistant investigate a plague of mysterious ‘vampire’ attacks surrounding a sexy upscale nightclub.

The Secret of the Mummy (1982) – Death stalks those who search for the tomb of Runamb, the mummy. Undeterred, Professor Expedito Vitus acquires all 8 pieces of the map, invests the mummy with new life and unleashes a murderous rampage!