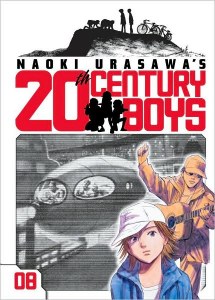 This is the story of a group of boys who try to save the world!; As boys, Kenji and his friends came up with a bunch of stories about an evil organization bent on world destruction. As adults, someone is now turning their fantasies into reality! What really happened on Bloody New Year's Eve? Kenji, Otcho and Maruo have just driven their dynamite-loaded truck under the robot…where they see what a poor relation to the giant robot they dreamed up in their childhoods it actually is: just two legs with caterpillar treads, held together by an enormous hot air balloon, with cloth hanging down to disguise the underside.

Meanwhile, at the meeting of the government's crisis control committee, Manjome Inshu unveils the Friend's benevolent plan to distribute worldwide a vaccine against the virus being spread by the robot. The Friends, he says, have been developing such a vaccine since the terrorist germ attacks of 1997. At the same time, the Friends will contribute a monument they were building for their headquarters to serve as a blockade against the robot. The Friends are saving the day! Or are they?